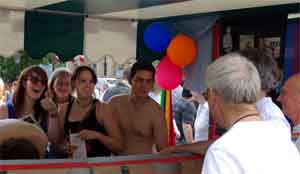 View from behind the scenes

For the first time in 2009 Aurora was promoted at London Pride, in Trafalgar Square, on the Croydon stand.

There were many fewer stands in the square this year, so we got a very good showing, backing onto the National Gallery.

Several new people expressed a ready interest to join and some very valuable contacts were made.

The stand was subsidised by a grant from Grassroots funding, to Croydon Area Gay Society (CAGS), which supports most LGBT groups in Croydon on its exhibition stands.

It was good to see several younger LGBT people coming up and leaving their contact details for Aurora specifically.

In previous years CAGS has marched in London and Brighton Prides, and has exhibited at Brighton and various other LGBT community events, and has ususally promoted Aurora.