IDAHO, the International Day
Against Homophobia

At 7pm, before the Aurora meeting on Thursday 17th May, we held a short IDAHO commemoration.

One difference this year is that we did not hold the one-minute silence for victims of hate crime against LGBT people everywhere. Instead we made a noise: bursting balloons. 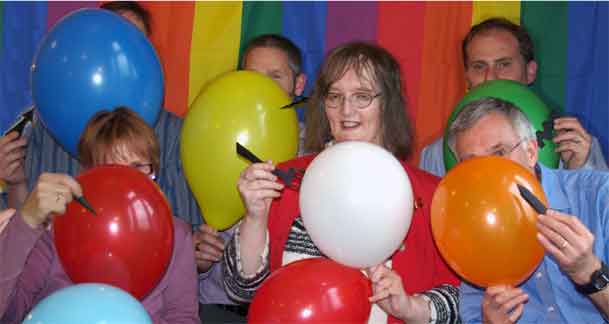 This year we are "banging homophobia out of Croydon". But it’s not as simple as bursting balloons. Aurora has had to find ways to contact difficult-to-reach minority groups.

All these projects required ingenuity and hard work.

We’ve got many more things to do and we need more LGBT people to Contact Us, to raise their own issues, and join us in solving them.

And we have failed to involve more black and minority ethnic people in Aurora. This was the only one of four commitments we made at last year's IDAHO that we've so far failed on. So if you feel you belong to that group of people - now's the time to speak up: we need you!