Bully turns her life around

Croydon Guardian, believed to be from November 2006

Laurianne Buhinja, a former pupil of All Saints Catholic School in West Wickham, regularly verbally abused her fellow students while at school. 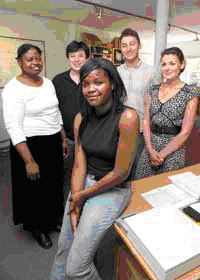 It wasn't until she had a meeting with Beatbullying that she realised just how damaging her behaviour had been.

She said: "I had quite a lot of emotional problems when I was younger and I think this made me want to take it out on someone. It was mainly verbal bullying, not really physical but I used to get in trouble for it all the time."

The day that everything turned around for Laurianne was when Beatbullying held a workshop at her school and her teachers, who were fed up with her behaviour, asked her to attend.

"The workshop really helped and it just made me realise that bullying people just isn't right. Whether you have had problems or not it does not give you the right to bully people and everyone has to do their bit to help people and try and stop it," she said.

After the workshop Laurianne volunteered to help other people and she has been working closely with the charity ever since.

She has helped to launch Bully Watch London, an organisation which aims to make people more aware and to encourage them to look out for and report bullying.

Laurianne added: "If you are a victim of bullying then make sure you talk to someone and make sure that someone knows about it, and if you are a bully and you are bullying people then try and remember how much you are hurting them."

She is now working with Beatbullying on a regular basis and says she would encourage anyone who is having problems to get in touch.

She added: "Beatbullying has changed my life because it makes you see bullying in a completely different way.

"The fund for the outreach worker is brilliant, it would really help a lot because other organisations could really work to beat bullying from within."

John Quinn, development director at Beatbullying, said: "Laurianne came to Beatbullying's attention as a student with troubles at home and at school. With little self confidence, things weren't looking good for her future.

"However, through a long and involved process with us at school and after school, Laurianne really turned things around by throwing herself into her work as an ambassador.

"Laurianne's self esteem has improved dramatically and she is now a more confident young woman, making a very positive contribution to her community."

Laurianne added: "My family are really proud of me and the way I have changed my life and so are my friends. "Anyone can beat it with some help."