About Sue Sanders - as presented in the grant application to Awards for All written in 2006:

Sue will lead the training sessions with school staff. 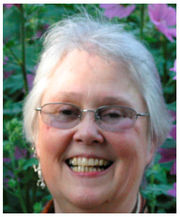 Sue is currently co chair of School’s OUT and instigated LGBT History month (1). She founded CHRYSALIS, a team of trainers that delivers work on Diversity and particularly LGBT issues. She is a member of the LGBT advisory group to the Metropolitan Police.

She wrote a simple guide to tackling homophobia in schools (2) and a teacher’s pack for Tackling Homophobia, Creating Safer Spaces (3). Sue delivers training to both staff and governors on the issues and is working with pupils and teachers in a variety of schools. She has co-written a model Equal Opportunity and Anti Bullying Policy for Schools which is also on the Schools OUT website. The DfES commissioned her as exhibitor and speaker at the nine regional launches of the Anti Bullying Charter to raise the issues of homophobic bullying. She works with the Criminal Justice System and the Department of Health and Education on LGBT issues.

She is a consultant to the Crown Prosecution Service, helping them produce national policy on prosecuting homophobic crime effectively, She is currently delivering training to the LGBT coordinators that she co-designed. She is an independent adviser to the London Criminal Justice Board.

She co-wrote a feasibility study for Croydon Local Authority to provide services for victims of homophobic abuse.

Sue is frequently a keynote speaker and workshop leader at conferences.

She is currently working on the Lambeth Project which is offering consultancy, inset training and work in the classroom to all schools in Lambeth to tackle homophobic abuse in schools. 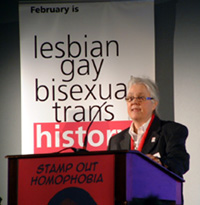 She sees 2006 (4) as a crucial year of change for LGBT people, as we have now seen the demise of Section 28, the implementation of the employment directives, and the passing of the gender recognition legislation which finally gives LGBT people some rights against discrimination at work as well as the success of the first LGBT History Month in February 2005.

2 www.saferschoolpartnerships.org/subject-menu.asp [dead link as at 2015]

4 This was submitted as a Supporting Document in the grant application to Awards for All in 2006.

Second photograph of Sue Sanders 2007, at the pre-launch of LGBT History Month 2008, courtesy of Nicholas Chindonay

See the article about Sue Sanders on Wikipedia.