More youngsters than ever before are complaining
about bullying to children's charity Childline. 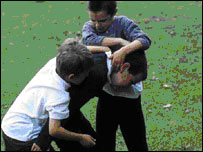 Bullying was the most common reason to request help - accounting for 23% of all the calls to the service.

The charity's Lindsay Gilbert called for every school in the country to introduce an "anti-bullying charter".

Ms Gilbert, head of Childline in Partnership with Schools (Chips), said: "Right now thousands of children are dreading going back to school because of the bullying they will face."

She called on parents and carers to play a role in shielding children from bullying.

"Not only can parents help tackle bullying, they are also crucial to helping their child through what is often a terrifying and demoralising experience."

As schools prepare to reopen for the new academic year, the organisation has released anti-bullying tips for parents.

The advice includes how to react if a child is being bullied, how to deal with the school, and how to detect the early-warning signs.

Childline cites an area of growing concern as homophobic bullying.

They estimated that 2,725 young people call them each year to talk about sexual orientation, homophobia or homophobic bullying.