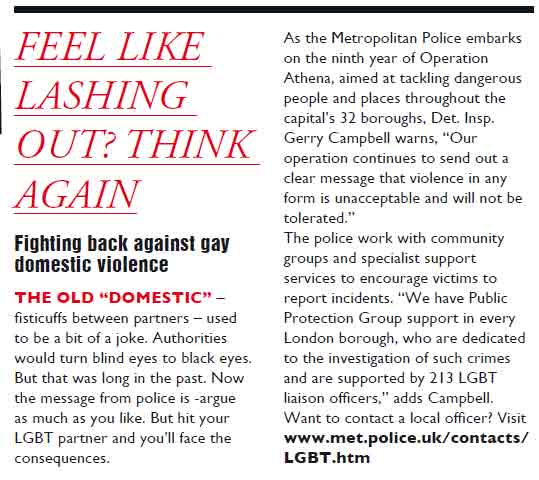 Fighting back against domestic violence

The old "Domestic" - fisticuffs between partners - used to be a bit of a joke. Authorities would turn blind eyes to black eyes. But that was long in the past.

Now the message from police is

- argue as much as you like,
but hit your LGBT partner and you'll face the consequences.

As the Metropolitan Police embarks on the ninth year of Operation Athena, aimed at tackling dangerous people and places throughout the capital's 32 boroughs, Det. Insp. Gerry Campbell warns, "Our operation continues to send out a clear message that violence in any form is unacceptable and will not be tolerated."

The police work with community groups and specialist support services to encourage victims to report incidents. "We have Public Protection Group support in every London borough, who are dedicated to the investigation of such crimes and are supported by 213 LGBT liaison officers," adds Campbell.

Want to contact a local officer? Visit www.met.police.uk/contacts/lgbt.htm. [Note it's "lgbt" rather than "LGBT" as above!]