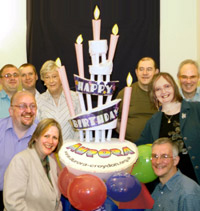 Aurora, Croydon’s LGBT Police Consultation Group, is celebrating five years of achievement. Aurora provides a forum for members of the local Lesbian, Gay, Bisexual and Transgender communities to meet with the local police to discuss matters of common interest.

Aurora meets regularly at Croydon Town Hall. The Aurora meeting on Tuesday the 6th of May 2008 Aurora will include a special fifth anniversary celebration to mark five years of activity

There have been many notable achievements in the last five years, but here are five in five years:

Inspector Mary Wood of Croydon Police’s Partnership Team said: “The job of David and the rest of the Partnership Team is to make sure that under represented groups can speak to the police and feel that they will be listened to, not judged. We want to encourage people to feel confident they can report crime or raise concerns and get a decent response. That is exactly what Aurora has been trying to do over the last five years.”

She added: “We've tackled a few problems together which I think has improved our understanding of each other. It helps that the Police have a diverse workforce, but that doesn't always mean we can see things from the community prospective - that's why groups such as Aurora keep us in touch.”

Robert Elliott, Community Representative of Aurora said: “For the LGBT community, policing in Croydon has come a long way in the last five years. The work that Aurora has done – with the dedication of community members and the strong support of the Police has made a major contribution to that improvement – especially now that we have our fantastic dedicated PCSO.” 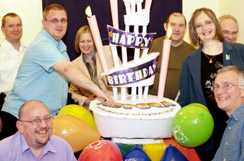 He added: “I look forward to the Police and the LGBT community working even closer, for the benefit of all in Croydon.

For more information, see Contact Us, or see other achievements as of May 2008.