What do we do? 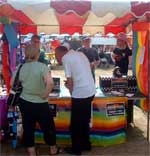 Here's a list of some of the things Aurora had achieved by its fifth birthday on May 2008. We've taken stands or marched in Brighton Pride to tell people what we do.

We are working to represent LGBT issues to the Croydon Community Police Consultative Group (CCPCG). See details of the CCPCG and its forthcoming business.

Our current Constitution and Detailed Procedures were adopted in April 2009. - And for completeness, here are the previous governing documents.

Where our money comes from.

The Cruising Working Party was set up to deal with current issues in cruising in Croydon. The Aurora Main Meeting on 15 March 2009 decided that this Working Party should no longer be part of Aurora.

There's an article about Aurora on the LGBT Archive wiki:
www.lgbtarchive.uk/wiki/Aurora_(Croydon).